When I set out last week to add some structure to my life and adopt some positive new habits, I knew it would be hard.  I made it through the first 24 hours swimmingly, and then the second day the difficulty of sticking with my resolutions ratcheted up unexpectedly high. Thursday and Friday were a lot easier and I was convinced I had reached a new plateau of personal awesomeness.

Friday night I had a few beers and the next thing I knew I overslept Saturday. My whole strategy is to front load the morning with time for myself, which appeals to my selfishness and so (I thought) it should be easier to achieve. Then the dishwasher died an ugly, noisy death. Suddenly taking time to go exercise seemed a little too selfish when I had a job to do. My weekend was consumed by a blur of salvage stores and big box scratch and dent sections until we found a decent dishwasher.

Sunday morning started out well with a gorgeous morning that was perfect for a run with Mrs. Nostrikethat. My dishwasher woes continued as I discovered that I needed a pluggy thing, and no one sold the pluggy thing because we bought the Delorean of dishwashers and the only place to get the pluggy thing was the Internet, after a delay of 2 weeks.

Sunday evening turned into an impromptu neighborhood event as a few of us gathered our folding chairs and drank box wine while our kids ran around outside. Sunday evening wine turned into Sunday night beer, and by the time 11 o’clock rolled around my Irish-ish neighbor and I had consumed an embarrassing amount of alcohol for a work night.

The next morning I discovered that my alarm clock sounded suspiciously like my guilty conscience.

I spent the morning in bed trying to determine exactly what kind of carpet my tongue had turned into as I pondered what I’ve learned this week.

With the dishwasher finally replaced and running, tomorrow is back to work. If I had to grade myself, I’d give me a “C” for the past week. This week we start again. Today was the first whiff of winter, and if I don’t have my new habits solidified by the time it gets cold and dark then nothing is going to happen in the winter.

I aspire to be a gardener in the same way I aspire to be handy: first I borrow a bunch of stuff from my neighbors, then they end up taking pity on Mrs. Nostrikethat when it’s been two weeks without load-bearing walls and finally they end up doing most of the work while I am entrusted with operating the Keurig.

To make matters worse, I am surrounded by green thumbs. My mother relates to vegetables on an almost instinctual level–although I am sure being married to my dad has given her plenty of practice. My neighbors all have several successful well-established garden plots. My Facebook feed is ripe with Gaea’s Bounty, too:

“Oh I have too many tomatoes this year, does anyone want some salsa?”

“Gardening is so easy and fun!”

Dutifully I watered and fertilized. My gifted starter plants actually grew and started to flower. I Believed.

I can totally survive the End of Days now. Who needs a grocery store? Man I am amazing.

Then my plants stopped responding to light, water, and nitrogen.

They looked like Thursday night after a week of double shifts working to close.

I tried giving them coffee because that always perks me up and I get my vegetative qualities from my dad so I thought the reverse might be true.

It’s as if they said “It’s August, I’m tired of life, let me leave you with a sampling of anatomically ludicrous fruits to taunt you with what might have been.”

Now let me introduce you to my mums. Despite not even the slightest amount of concern from me regarding their well-being they have come back every single year, bigger than ever. They are the ordinary Homedepotus Onsaleacus variety bought 4 or five years ago because we needed some “fall color” or something equally womanly. I think decided to plant them in that little spot because it was a nice day and I was avoiding doing the dishes.

We have had by all accounts a pretty fantastic summer. We’re luck enough to have friends. Some of those friends like us enough to invite the travelling Nostrikethat circus to go places with them. Our kids have amazing grandparents, near and far, who shower them with attention. We did swim team. We swam in a lake. We got lost in the woods. My most favorite moments, though, always seemed to just happen.

Sitting in camp chairs on the driveway drinking beer with the neighbors on a Tuesday night.

Listening to the kids tell jokes at the dinner table. BANANA SANDWICH! HAH!

Sharing a quiet glass of wine with Mrs. Nostrikethat after the kids have exhausted themselves from playing outside all day.

Staying up late with my oldest to play video games.

I’m sure there’s a metaphor in here somewhere.

Or maybe I just need to remember to ask someone to water the plants when we go away for a long weekend.

Please do not be alarmed by the construction scene in your driveway. I had to take immediate and urgent action to preserve what may be the most important artifact in American folk art since Arlo Guthrie’s early draft of Alice’s Restaurant was uncovered in a Topeka grain silo. I’m trying hard to be modest, but you’ll have to excuse me if I sound a little braggy because I’m just so gosh darn proud– unbeknownst to us, we have another artist in the family! I guess that extra dollar in the church donation envelope really paid off! As we speak, a crew is now carefully excavating my son’s work to ensure the creation survives intact. We’re calling it: Giant Chalk Weiner.

MoMA is expecting the concrete slab to arrive Thursday so they can work around the clock to have it ready for display on Monday because (quoting the director) “a weiner this significant just can’t be hidden from the public.” We are, of course, super excited to have our second artist in the family with a gallery opening, but this means that unfortunately we are going to miss your cookout this weekend. Of course, if you wanted to reschedule your shindig in light of this seminal moment in the art world, I could probably score you some tickets to the premier, on account of it being your driveway and all.

I wish I could take some credit here, but this is really all my son’s doing. You see, state law requires that I “attend” my children under 8, so I was strategically positioned in the cul-de-sac to where I could probably monitor what my children were doing, but definitely finish my Fat Tire Amber Ale. Therefore, when the words “Hey, I can draw a weiner–watch!” drifted to my ear, I didn’t immediately leap up to capture the moment for posterity, or at least a humorous Tweet, because I was fostering independence in my children by ignoring them completely.

Thanks for being so understanding about the mess. Katie Couric is going to stop by later to shoot an interview, can we use your house as a backdrop? Not the driveway of course, they won’t have the new cement poured until next Tuesday, maybe Thursday tops. We’d do the GMA shoot in our yard but my azeleas are a hot mess this year what with the long winter and all. Also, your new siding looks great! 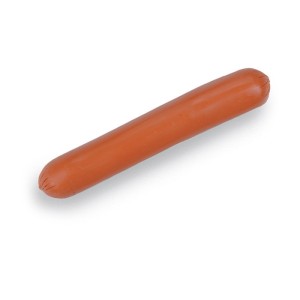