Gather around ol’ ‘Granpappy, kids. Did I ever tell you about the great Ice Cream War of ’14? Tommy, go get ol’ Granpappy some more vino out of the box there… that’s a good boy. Tellin’ stories is thirsty work…

I admit I am a bit “funny” about food.

I generally believe that there is far too much added sugar, salt, and fat in the foods we eat. I also believe that if I don’t get my Utz Potato Chips (ingredients: potatoes, sunflower oil, salt) to go with my Jif Peanut Butter and store-brand Grape Jelly sandwich at lunch, there is no justice in the world, and someone is going to get shanked.

Some people call this hypocrisy–I call it being human.

As a parent, it’s even more perplexing. I can just about convince myself to believe any given set of arbitrary set of rules I want to follow, but my four kids are like a cheese-grater for rules.

“Why can’t we have chocolate chip pancakes? They’re home-made!”

“Can I have a Popsicle? You said it was mostly water!”

“Daddy, you’re making that up!”

If the rules are not self-evident, they take a disproportionate amount of effort to defend, and eventually get abandoned because it’s not important enough to waste my precious energy on.

One by one, all of my pre-conceived rules and beliefs that I started with on my parenting journey have shriveled up and died under constant, relentless assault.

No juice on the couch? Gone.

We will all sit down and eat all our meals together? So, so gone. 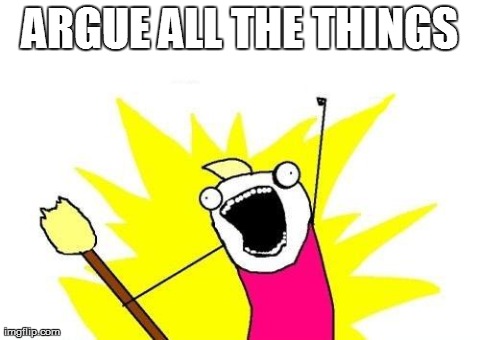 I am down to just a handful of guiding principles:

This works pretty well for the most part, although I struggle with “Hot things are hot” at the expense of my children’s vocabulary far too frequently.

I scream you scream

There’s a new development around the corner from us that has 5-story townhouses in it. My wife and I were on our way to a rare lunch date, and driving through the development we had a flash of inspiration.

“Wow, yeah, that’s a lot of stairs. Imagine all of the stomping up and down our kids do now, and then multiply that by five.”

“… wait, I think you’re on to something here. ‘Get back down here missy and stomp up those stairs again. All the way up! No that wasn’t loud enough, come all the back down and do it again!’ ”

Our daughter, in particular, has decided that the Stair Stomp Of Death is her most favoritest way to register her disapproval with homework, insufficient sprinkles on her donuts, and/or she’s hungry and there is no food in her mouth yet.

Today alone, we’ve managed to get three separate runs up the stairs squeezed in between breakfast and bedtime.

I am negotiating with the electronic toll people to have a toll lane installed on our stairs for express-stomping during rush hour.

“Daddy can I have some ice cream?”

“You never let me have any ice cream? Why do you even buy it?”

“Yes, that last time I scooped out Ice Cream for you, I never let you have any.”

“I said no. And now I’m throwing it away because I’m tired of arguing about it. Again.”

Ice cream goes into trashcan. Daughter fishes ice cream out of trashcan. A scuffle ensues. An arm is bitten. 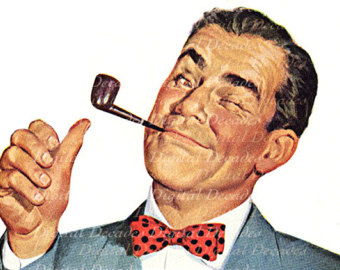 What I meant to say was…

The thing is, I don’t really know why I make such a big deal about this. I mean, it’s only ice cream. We buy it. It’s illogical to buy it and not eat it. It just just doesn’t feel right, I guess. For me, that’s really the core issue. One of the lies I tell myself is that I am a consistent and reasonably rational person. If I can’t explain my actions, are they really sound?

So here’s what I really meant to say:

I know you wanted Ice Cream tonight. You made that abundantly clear. I also made abundantly clear that the answer was “No Ice Cream”. I don’t have the energy right now to properly explain my philosophy on nutrition and parenting, and even if I did you really  just don’t have the life experience to understand it because, contrary to what you think, you’re 10 going on 11 and not 10 going on 21. For now, you’re just going to have to accept “Because” as an answer. I hope we both live long enough to see you realize why.

If there’s one thing, ONE THING, that makes me foam at the mouth, it’s when people insist that “X” makes you fat, when “X” is anything other than “consume more calories than you expend”.

Working on a computer all day makes us fat.

These days the F-word seems to apply to anyone who doesn’t have a thigh gap.

Being lazy does not make you fat. The world is full of skinny, lazy people. I am one of them. I was 80 pounds soaking wet through most of high school.

I was also a band nerd with helmet hair.

Obesity seems to be the only disease where it’s still socially acceptable to blame the ill.

We are only beginning to understand the real complexity of the triggers for this disease. Why are there some people who only have to look at ice cream to gain weight? Once you are obese, it’s very, very hard to lose weight– it seems like you are literally fighting a constant battle against your body’s survival mechanisms.

So why are we getting worse?

If there’s one thing we can trust humanity to do, it’s figure out how to make a buck from the suffering of others.

Zach and Miri Make a Smoothie

The American diet industry goes back to at least the 1950s when the first weight loss drink appeared on the market. Prior to that point, food science had not matured to the point where we were able to manipulate our food at the chemical level (beyond burning the meatloaf), so weight loss fads focused on concealing rubber garments.

My favorite obesity conspiracy theory used to be cheap corn creates high fructose corn syrup, which gets added to everything and makes us fat. It turns out that this may not be the entire problem.

It’s not just corn that’s cheap: wheat and soy are both commodity crops that are frequently over-produced and/or receive subsidies. Removing those subsidies won’t have a substantial effect because the prices will still stay low, because economics.

In other words, it’s not the farmers who stand to gain from over production, but the processed food industry. As long as the wheat in our Wheat Thins is stupid cheap to for Nabisco to buy, there is plenty of budget left for clever marketing!

We’re damned from the moment we open our eyes, because we interact so heavily with media during the course of the day that our brains are saturated with the tantalizing deliciousness of Cool Ranch Doritos from birth to age 99. By the time we set foot in the grocery store, we’re already well-programmed to self-destruct.

Kale is the new black

The experts will tell you “Oh just shop the outside of the store.” These experts have never gone grocery shopping a DAY IN THEIR LIVES.

I think the stores are getting wise to this strategy because I haven’t been into a grocery store yet where the bakery was in the middle bit.

Regardless, as soon as I walk in, my cart is making a beeline through the asparagus and to the cakes.

Also, juice boxes are not near the organic kale, and you can bet which one the kids will give me grief over when they find it in their lunch boxes.

In fact, kids are probably the real leading cause of obesity in this country.

More times than I can count I have eaten leftover chicken nuggets because the child was done and I can’t waste good Chik-fil-a.

It’s only recently, as a direct result of a few of my children somehow surviving long enough despite my constant efforts to screw them up, that I have seen the light at the end of the tunnel. I can say from personal experience it gets better.

Slowly, ever so slowly, they start to appreciate real food.

In our house Mrs. Nostrikethat and I agree that the best thing we can do for our kids to help make them successful is to make sure they’ve got a good mix of fat, fiber, carbs, and veggies on their plates so they can wander off in the middle of dinner to go play.

As I have written before, feeding kids (and especially toddlers) is an exercise in the absurd. They never like what you make, and it seems like you just get the kitchen cleaned up when they’ve digested the tiny amount of food they just ate and are back for more. I’m no internet expert here, either.

I’m even using JIF, because I’m a choosy mom. Dad. Whatever.

BEE-BOOP ROBOT DAD BUYS WHAT HE IS PROGRAMMED TO BUY

Taking a stand (while sitting)

Let’s review the forces in play. In this corner, we have:

Parents, give it your best shot.

Take your kids to the playground when you can.

Try to put something green on the plate when you can.

Maybe ease up on the soda and drink a little more water yourself.

There are countless ways we can be bad at being parents, and no expert is going to tell you to just muddle through because that doesn’t sell a lot of books.

Worst case scenario, your kid grows up and writes stories with funny pictures in them on the Internet.

If I have to be outraged by something, I’m outraged by the fact that in the United States today there are more than 16 million children living in poverty.

I am outraged that there are 50,000 kids in our nation’s capital that may not eat on snow days.

How much iPad someone else’s kid plays? Not so much. Those stakes aren’t very high.