The name of the site comes from the old habit of dictating to someone who was transcribing on a typewriter… the secretary would schooch the paper back over and hit minus signs over the originally captured idea so it could be omitted from the “clean” copy later. I wanted to capture a little bit of that unfiltered, first-thing-that-I-think-of type writing.

I am a father of 4 fairly typical kids- 3 boys and a girl (Boy-girl-boy-boy). My parenting philosophy can best be summed up as “Children should be neither seen nor heard, because they’re outside running around so I can get some peace and quiet around here.” I call this “Ignore Parenting“.

Writing is not my full-time job, but I’d like it to be one day. Your visit is encouragement in that direction, so thank you.

Update: as of November I am currently beardless and fantasizing about growing it back again.

As a child of the 80s, the opportunity to NOT name my kids after the characters on “The A-Team” was too good to pass up. 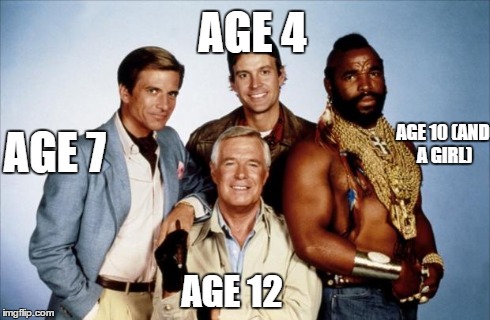 My oldest son is in middle school and is an occasional guest blogger at Nostrikethat. He likes swimming, video games, and bludgeoning people to death with his Giant Brain.

My second son is currently in first grade and possesses a dangerous amount of personal charisma and a harem of female admirers. I can only pray he will use his powers for good.

My third son is only four and a certifiable lunatic. He likes earthworms, peanut butter and jelly sandwiches, and whatever his older brother Faceman is doing. He is armed with killer dimples and an utter fearlessness in using them.

Unfortunately, the A Team does not leave me any decent female characters, so wedged in between Hannibal and Faceman is:

My daughter is in 5th grade, also a swimmer, and has contributed a post for this blog as well. While she does sometimes have the “Bad Attitude” part of “B.A.”, it’s hard to blame her when she has to put up with her three brothers.

Have a question? Want to give me an idea? Anything else? Use the handy form below!

17 thoughts on “Nostrikewhat? (About me)”