It all started with an idea.

Hey, maybe we shouldn’t eat as much junk food.

What a great idea!

What do we eat?

I hear broccoli is pretty awesome.

Look at all these fat bastards. I bet they eat too much junk food.

Good thing we eat our broccoli.

Then the next thing you know, the idea gets elected to the school board. 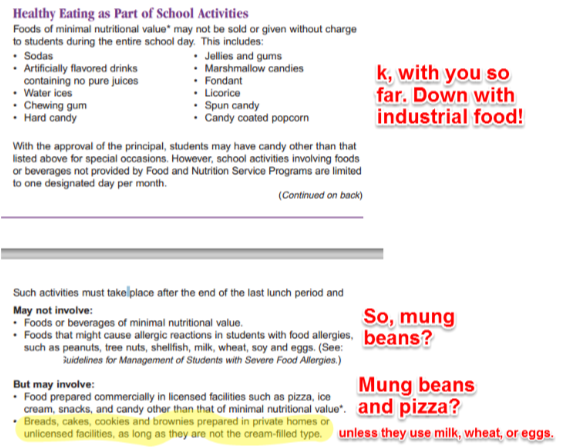 Before you know it, this ends up on my refrigerator:

This leads to the conversation every parent dreads:

Daddy, why is the public school system so dumb?

*heavy sigh* Well son, because the school system is made up of adults, WHO– as you frequently remind me– are stupid. They sit around in a room and someone says, “Hey I have an idea…” This is the result.

But it’s so lame!

Let this be a lesson to you: the road to Hell is paved with good intentions.

I’m not really into Halloween. Or Christmas. Or birthdays. Really, not much on holidays.

I love me some oatmeal, though.

I am a well-known fun-sucker and a freaking General in the Food Police Department. I have thrown out an uneaten tub of ice cream rather than deal with the whining for dessert. If anyone should be lining up to kiss the Blessed Ring of Wisdom for banning candy from a HALLOWEEN PARTY it should be me.

Look at that fat puppet bastard.

Yeah, what a slob.

I bet he’s going to get Diabetes with all of those cookies he eats.

Serves him right, I– oh be right back, this broccoli is moving right through me.

At least he gets “sometimes”, though.

Just cancel the celebration of Halloween.

Please, just put it out of it’s misery.

It’s one of those things like the old timey bicycles, or a flip phone, that has become a relic of a quaint bygone era. A simpler time when children made their own costumes out of dad’s varsity jacket and mom’s old hippy clothes.

Nothing terrified people of a certain generation more than hippies.

I’m keeping my kids out of school on Halloween.

Well, actually we’re going to go to the parade and watch.

With a giant bag of M&Ms each.

Because nothing terrifies people of a certain generation more than candy.

View all posts by Nostrikethat

7 thoughts on “Alas, poor Halloween! I knew him, Horatio”